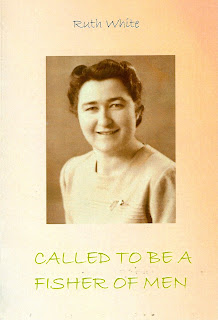 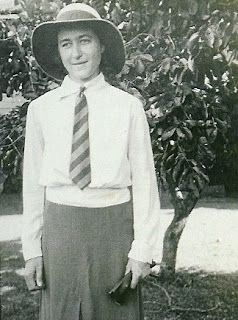 The following excerpts have been taken, with permission, from Ruth's autobiography, 'Called to be a Fisher of Men' (pictured), which was published in 2006. The photo of Ruth as a school girl was taken 1934, ready to commence her studies at Brisbane State High School.

On 11 June 1920, I was born the last of eight children to Francis and Jane White, in the large family home on School of Arts Road, Redland Bay. The waters of the bay lapped the eastern boundary of our 24-acre property called 'Mt Carmel Orchard'. The name 'Carmel' primarily means 'Mountain of God', but with a second significant meaning, 'The Zenith of Fruitfulness'. This meaning aptly describes the amazing variety of fruits grown in the orchard's incredibly fertile red soil - such as custard apples, mangoes, avocados, bananas, pineapples and citrus of many varieties.

The view of the blue waters, surrounded by many islands is spectacular and a constant delight to the eye. From earliest years, we children swam, frolicked, and had great fun in the water. Especially in the summer holidays, we would run down to the beach when the tide was full in and enjoy swimming and diving. Later on, sailing in my brother's 18-foot yacht was great fun. At other times, we would row out into the deep channel in a small dinghy and spend time fishing. I'll never forget the day when my father and I were out fishing and the little boat capsized and we were thrown out into the deep water. Fortunately, a local fisherman saw our plight and heard our calls for help and came to our rescue. But we were also solemnly warned of the hazards and dangers that abound in the sea. It was on December 30th, 1905 that a tragic accident occurred. My mother's only brother, William aged 18 years, was drowned while trying to save the life of a yong lady. After the drowning of his son, Grandfather Fielding donated a corner of his property in Queen Street for the building of a Baptist Church.


"Know therefore that the Lord thy God, He is God, the faithfyul God, which keepeth covenant and mercy with them that love Him and keep His commandments to a thousand generations" Deuteronomy 7:9.
...
My father, Francis White was born in Petrie (on the northern side of Brisbane) in 1879. As a young man he was soundly converted and fellowshipped with other young men of the YMCA (Young Men's Christian Association). His interest in the church as a preacher and singer led him to meet Jane Fielding whom he married in 1909. In 1913, Francis and his family moved from Brisbane to the 24-acre property in Redland Bay which he named 'Mt Carmel Orchard'.

Dad was a man of integrity always defending the truth. He had a strong character and was a man of prayer. After a hard day's work in the sun, and after cleaning up, it was his custom to kneel beside his bed in prayer before the evening meal.

After breakfast, family worship was observed when Dad read a passage of Scripture and then we all knelt down around the table when Dad led in prayer. Here let me state that my father, observing family worship daily, made a tremendous impression upon me. It was also a very stabilizing factor, when as a young adult I entered society.

He was a gifted public speaker and so he was called upon to preach at the local Baptist and Methodist churches when his turn came around. Moreover, he was chairman of the school committee, and several fruit growing committees. He had an outstanding bass voice and the quartets in which he sang in the Redland Bay Baptist Church were beautiful and something to remember. Dad was a Sunday School teacher and after Grandfather Fielding was unable to continue, he became Superintendent. There were no medical facilities in the district in the early days and Dad became known as the 'local doctor'. When people were sick or in trouble they would come to him for help and advice. He contributed much to the welfare of the community and was highly respected.

And what can I say about my dear mother? Read Proverbs 31:10-31 and this will give you a good description of her character. In the obituary, at the time of her death in her 97th year, verses 28-29 were quoted: "Her children arise up, and call her blessed ... Many daughters have done virtuously, but thou excellest them all." Mother was loving, self-sacrificing, capable, dilligent and highly organized.

She would be up first in the morning to light the wood stove and have the room warm on a cold, winter day and a hot bowl of porridge for all. I can still remember her singing, 'My Jesus I love Thee'. as she sat at the kitchen table making sandwiches for the many lunches required for the family. Her cooking was superb and there was never any lack. She was an excellent needlewoman, and even before marriage, she went to Brisbane for oil painting lessons under Sir Godfrey Rivers. When still a very young child, I was taught to pray at my mother's knee. At an early age, I attended Christian Endeavour, Suday School and the church services. Sundays were strictly observed as the 'Lord's Day'. No outside work was done even in the busiest of seasons.

I accepted the Lord Jesus Christ as my personal Saviour and at age 16 was baptized. For years, Grandfather Fielding had us all enter Scripture Examinations set by the Baptist Union of Queensland. One year, I gained the gold medal. In this way, we memorized many passages of Scripture and got to know the Bible well.

Education
Following in my mother's footspeps, I attended the Redland Bay State School. That meant a two-mile walk to school and a two-mile walk back home. It was a two-teacher school with 70-90 pupils. Today, with all the population explosion and development in teh district, the attendance has risen to over 700 pupils.

When I was about 13 years of age, I became the girls' tennis champion for the district. Having our own clay tennis court, Lucinda and I would get up at five o'clock in the morning and have an hour of practice before school. That improved our skills. Despite the Great Depression, we always had an abundance of fruit, vegetables and dairy products. And in fact, during World War II we had so much butter that it was made into soap. Times were hard during the depression and our parents toiled hard and made big sacrifices to give us children a secondary education. And the fact that we lived far out in the country away from the centre of Brisbane when motor vehicles were few added to the difficulties we faced. The older members of the family boarded in town with relatives. When I passed the Scholarship examination which allowed me to go to the Brisbane State High School, I was able to travel by 'service car' on dusty, unsealed roads leaving home at seven o'colck in the morning and returning home by six o'clock in the evening. It was a very long and tiring day. After four years at High School, I received a scholarship to the Teachers' Training College (TTC).

Call to missionary service
It was while at TTC that my brother Frank was farewelled to China with the China Inland Mission. In 1939, I attended that farewelll meeting at Ann Street Presbyterian Church, Brisbane, and through the challenge of one of the speakers from Isaiah 6:8, I heard the voice of the Lord saying, "'Whom shall I send, and who will go for us?' Then said I, 'Here and I; send me'." In my heart, I answered that challenge and those words constituted my call to missionary service. Here let me state that our home was always open for visitors, ministers of the gospel and missionaries home on furlough. Mother would say, "Where there is room in the heart, there is room in the home". And I believe those godly people brought much spiritual blessing with them. One of the regular visitors was Mr Peter Olesen (Uncle Peter) a friend of my father from his YMCA days. Uncle Peter went to China with the China Inland Mission. So it was not surprising that five of us eight children ended up in full time service for the Lord. Halley, my oldest sister married Harold Nicholls, a Baptist minister who later became Principal of Queensland Bible Institute. Their daughter Ruth served as a missionary with Interserve in Pakistan for many years. Then there was Frank who served with CIM in China. During World War II he joined the British Military Mission, Gurkha Rifle Regiment and became Captain. Later, in 1947 he was married to Ella Davidson in the cathedral in Shanghai by Bishop Frank Houghton, General Director of CIM. Joyce left for Hebron High School, India in 1938 and married Raymond Golsworthy in 1941. Lucinda went to China and in 1952 she married Harold Wik in Singapore. They spent 34 years mostly in Malaysia with Overseas Missionary Fellowship (the new name of CIM). ... The long ministry of my sister Lavinia and her husband Roland Skerman is worth noting. In 1949, they commenced Sunday School work in Thornlands gathering 60-80 children together. This developed into Thornlands Christian Gospel Centre where we now worship.

[This is just a few pages of Ruth's book, 'Called to be a fisher of men', which gives detail of her life work as a missionary in Japan. JJ]

Stumbled onto your blog :). It was a joy to read your posts. Thank you for keeping these blogs up. Just reading about my grandmother brought tears down my face. 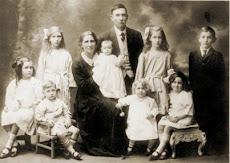